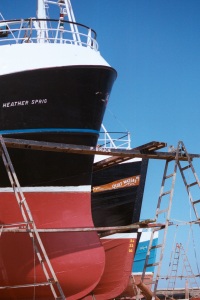 (Names have been changed to protect the guilty.)

In Scotland, at least where I grew up, groceries were called “messages”. For four years, from 1969 till I left for London in 1972, I was a message boy, delivering provisions to homes in our town. I worked Thursdays and Fridays after school, all day Saturday, and for the last year or so, on Sunday mornings. That was the day we delivered supplies to the fishing boats tied up in the harbor, before they headed out into the North Sea for the week.

For the most part, I was driven around in a Vauxhall Viva estate (station wagon), by either the grocer, his wife, or, if the shop was really busy, the grocer’s father, Jim Sr. The latter was, to this callow youth, an intimidating man. A former sergeant-major, he brooked no suggestions, or advice from a young, long-haired lad. Our trips together around the town often took way longer than necessary, since he ignored my planned-out route, and just drove wherever he wanted.

I stood on many a doorstep in rain, snow, darkness, and sunshine, waiting for the grocery box to be emptied and returned to me. Through those door frames, I saw snatches of events on televisions broadcasting in front rooms: Apollo 13 taking off on a rainy Saturday, putts missed at the British Open, football matches, the announcement that Jimi Hendrix had died, Vietnam war casualty figures, as well as more mundane fare, such as game shows and sitcoms.

One older couple who lived close by the shop down by the harbor often invited me in for a cup of tea, so I always made a point of delivering their groceries after lunch on Saturday afternoons. I remember watching the annual Oxford/Cambridge boat race a couple of times in the cosy front room of their little stone house. Years later, my mother told me they’d lost their son at around my age, and that the company of a young man, reminiscent of their own, was a comfort to them.

All this took place as hormones raced through my skinny, adolescent frame, and I freely admit to harboring fantasies of a physical nature toward a few of the ladies I serviced. Of course, nothing ever happened; I never would have picked up on their transmitted signals anyway, being a Johnny-come-lately to the complex minefield of l’amour.

One Friday night, in the dead of winter, with ice covering the streets of our town, and snow piled high on the rooftops, Jim and I were heading back down the hill, having finished our deliveries for the evening. Coming up the hill on the wrong side of the road, a car headed towards us, fishtailing as it tried to gain traction. We assumed the car would move over, but as it got closer and closer, headlights weaving back and forth, it soon became apparent that it wasn’t changing course and was still headed straight for us. At the last moment, we made a swift left turn on to a side street. The other car hit us on the rear quarter despite our evasive move.

With expletives and clouds of condensed air flowing off his tongue, Jim jumped out of the car, took a quick look at the damage, and slid his way over to our assailant’s vehicle. Incensed, he hauled the door open, only to be greeted by four skippers of fishing boats, all drunk as skunks. All of whom happened to be very good clients of the grocery. His anger instantly subsided, and he wished them all a safe ride home with a laugh and a smile. This inebriated encounter provided me with an early lesson in diplomacy, and taught me to always remember on which side your bread is buttered.

During the day on Saturdays, the shop furnished me with a message bike to make deliveries. I think that old warhorse weighed around a ton. It varied from a regular bicycle in that it sported a small front wheel, thus giving ample room at the front for the giant wicker basket that sat in a metal frame. When the basket overflowed with boxes of groceries, the bike felt front-heavy, to say the least. I had to lean on the saddle as I pushed it along. This prevented the rear wheel from heading skyward. “Why not just get on the bike and ride?” I hear you ask.

The town we lived in was built on the side of a steep hill, and the shop was about three-quarters of the way down, near the harbor. Many’s the Saturday afternoon I could be seen grunting my way up the main street. On one occasion, a middle-aged man, who was also walking up the hill as I wrestled with the black behemoth, shouted across the road at me. He wore white, painter’s overalls, and a black beret. “Want to go to the pictures with me tonight?”

Stunned, I mumbled back. “No, thank you.”

That’s me, polite to a fault, even in face of attempted pedophilia.

As tough as the slog up the hill was, riding back to the shop with an empty basket was no picnic, either. The bike had, in effect, no brakes. I would barrel down the hill, dodging cars and pedestrians. How I wasn’t killed many times over is still a mystery to me. I did become quite adept at braking by jamming my right calf on the pedal and applying my right shoe to the road. My father was always puzzled by the extremely uneven wear on my trainers.

Delivering messages to the fishing boats often proved to be eventful. One year, close to New Year’s Eve, a very busy time, the owner enlisted the help of his brother-in-law, Eric, to drive me around. It was low tide, and the boats sat a long way down from the quay. At high tide, I could just jump across on the decks, but that day it meant climbing twenty feet down the steel rungs embedded in the harbor’s concrete wall.

A wooden rail, to stop cars from plunging into the water, ran the length of the wall. The first rung was on the quay itself, on the other side of the barrier. Eric promised he’d hold my left arm to help me get it on to the first vertical rung, since I was carrying a fifty pound bag of potatoes under my right arm.

“Safe as houses,” he replied, smiling.

I took my left hand off the rung, and he immediately let go of my arm. The potatoes and I plummeted to the deck. The potato bag hit first, split open, and spuds flew everywhere. I fared better than they did, landing on my back on a large coil of rope.

“You okay?” Eric shouted down. I didn’t reply, mostly because I’d had the wind knocked out of me. After I got my breath back, I voiced my disappointment in him using language that would have impressed a sailor.

A couple of times a year, big storms would batter our little harbor, occasionally so fiercely that a boat or two would slip their moorings, and proceed to wreak havoc on the others. After one such storm, on a Sunday morning, we had to drop off supplies to half a dozen boats. The worst of the weather had passed, but the water in the harbor was still quite choppy. We pulled up to one vessel whose moorings had become slack. The boat sat about ten feet off the quay, pitching around in the rolling water.

He gave me a short laugh. “I’m nae asking’ ye to swim across. Jump.”

Adolescence is a funny business; fear is something never to be shown, or admitted to, even in the face of being asked to do something stupidly dangerous. So I backed up several steps, watched for when the boat came closest to the quay, ran for all I was worth, and leaped. Yes, of course I made it. If I hadn’t, I wouldn’t be writing this, having been crushed these many years ago, betwixt ship and wall.

So it was definitely a formative experience, those four years delivering groceries. I knew everyone in our little town, and they all knew me. Returning home for my father’s funeral, fourteen years after I’d left, almost everybody who shook my hand remembered me from my message boy days.

I was still an idiot for the next twenty or so years, but not as much of a one as I might have been, had I not been the Message Boy.